Our Angels project came into being after Jeremy Sutton was shot whilst on a field-trip into MaputaLand, to collect and pay for, woven lampshades.

At the time, he and Jackie were working on a design for a little beaded Angel, intended as a Christmas ornament.

As a lasting memory to Jeremy, we went ahead with producing the Angels in a specific colourway – Gold, Silver & Petrol.  We established a trust for the funds generated from the sale of these Angels, and from this fund, we were able to assist various charities, for example, Life-Line Zululand, for their Trauma Counseling and Outreach Programmes.

It has been very satisfying and therapeutic to have turned such a tragedy into something positive, whilst at the same time generating an income for many Zulu women in our area, who knew and cared for Jeremy, and to this day, still refer to these as “Jeremy’s Angels” 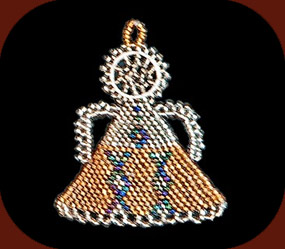 Our Peace Angels were inspired by the tragic events of the 9-11 bombings in the USA, and it was hoped that these little Angels would send out a message of Peace.

Both the Crime and Peace Angels have flown to all corners of the World, carrying their message, and the response was phenomenal, with messages of support and encouragement flowing in.

The South African Embassy in New York hosted a function for 350 guests and placed one of our Peace Angels at each place-setting! 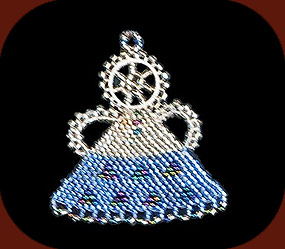 Our “Angels with Attitude” project came about after we were approached by the Headmistress of a local community school for a donation towards their feeding scheme for orphans and vulnerable children (OVC’s). Many of these children have been orphaned as a result of AIDS, of which there is a particularly high incidence in this area. Although a number of the OVC’s live in the care of elderly grandparents, or other family members, there are those who have no adult care or supervision, and have to care not only for themselves, but often younger siblings as well. (Despite the fact that they are teenagers, life is pretty tough for them). 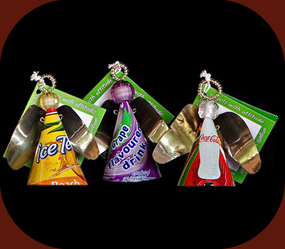 They remain at school every afternoon, and under the watchful eye of a (voluntary) carer, are given a Midday meal, after which the carer sees to it that they complete their “homework” for the Day Rather than donate money, we decided to go the “earning and learning” route, based on the old saying: “give a man a fish…” It took many sleepless nights to come up with a suitable project for them, – this had to be simple and saleable, with inexpensive base materials, and so the tin-can angels were born! – A great lesson in cleaning up the environment and recycling, whilst at the same time providing the kids with a small income, and the school money for their feeding scheme. Altogether a win-win situation that has proven to be hugely successful, and has given these teenagers a sense of self-worth. Four of the boys, after completing their schooling, came to work with us at Ilala Weavers, and through encouragement, have now gone on to be successful in other fields. One we managed to get enrolled in the Phinda cookery course, and he now works as a restaurant chef, another is climbing the ladder with a well-known supermarket chain, and yet another has become an entrepreneur selling live chickens in his area! 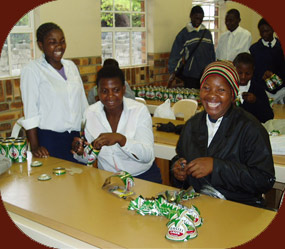 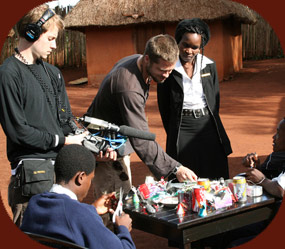 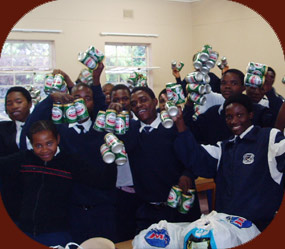 One of our most exciting moments was when we were approached by a well-known brewery in South Africa to make 10,000 angels to decorate 500 Trees as a Christmas promotion for one of their lagers, which sports a green red, and white can.

BUT, we had a deadline of just 4 weeks!!! –Oh my word, what a dilemma! – after discussions with the school, and the children, all agreed that it could, and would, be done!. The next hurdle was to find 10,000 used cans – – impossible! – The brewery was so determined to help, that they sent up a truck, piled high with pallets of (empty) beer cans, which caused great excitement in our little village, the general consensus being that Ilala Weavers “must be throwing the mother-of-all-parties!!!!” (see photo of cans arriving, and the OVC’s receiving their first batch ……what a moment!)

It was one of the most nail-biting 4 weeks, but in the end, the angels came through for us all, and the last angels were completed with just TWO days to go on the deadline!! We had dangled the proverbial carrot and offered prizes for the top 4 producers (2 boys and 2 girls), and thus followed an exciting and memorable afternoon at the school, with cakes, cooldrinks, prize-giving and the handing over of a cheque in the amount of R10,000 for the school!! (see photo)

There was celebration, jubilation and many tears flowed – the money which the OVC’s earned from that one project was beyond their wildest dreams – Mrs.Gumede, the Headmistress, told us afterwards that the prize-winners were totally overwhelmed, and one of the girls was in shock for two days, after receiving her cash, plus her prize of a mobile phone!

Thus the Angels with Attitude were born, and continue to fly, far and wide and not a can to be seen littering the street verges of our little village in Africa!